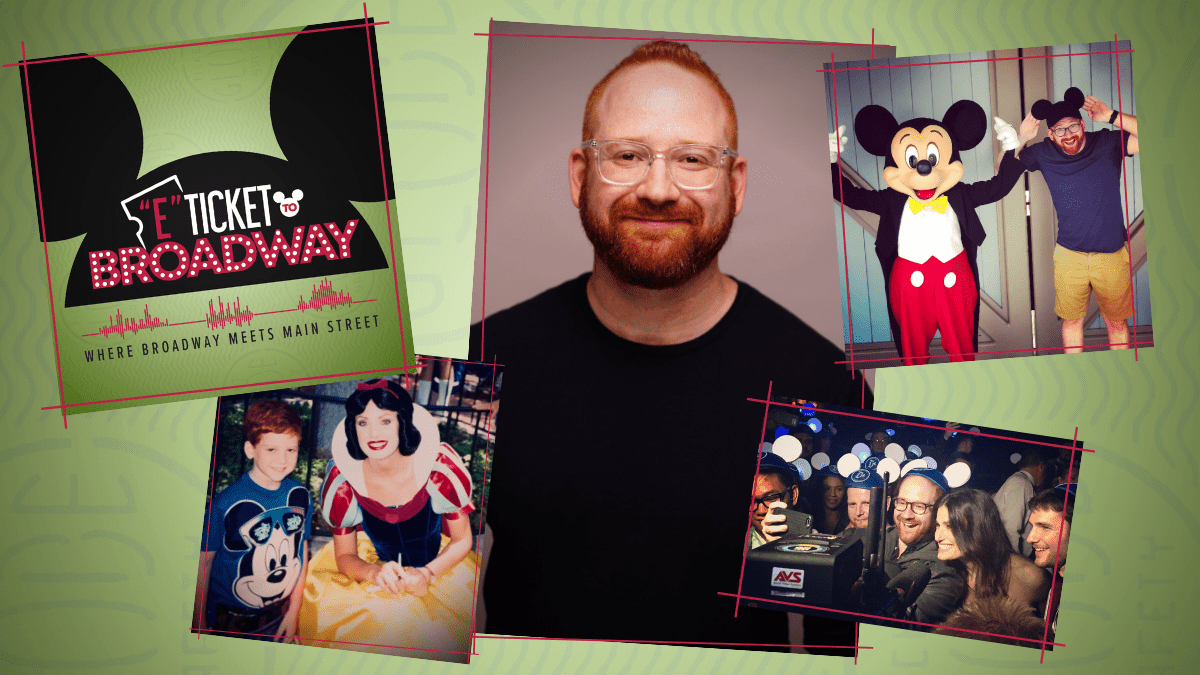 David Alpert, host of the new podcast E-Ticket to Broadway, is an award-winning director of musicals and plays, the producer of the “Living for Today” concert series, and an adjunct professor at New York University. E-Ticket to Broadway welcomes Broadway stars join David to talk about his #1 passion, Disney Parks.

David began his podcast during quarantine. Reflecting on this new experience, he says,  he “loves the differences between this medium and live theatre and especially the fact that he is able to edit!” He has really enjoyed getting a chance to openly and proudly discuss shared passions with the Broadway community, specifically what the Disney Parks and brand means to them. He has also found intense joy in connecting with fans of his podcast and the stories they have shared with him.

As a podcast host, David has learned that when a guest is answering a question, giving them the space to answer will more than likely give way to an even more heartfelt and personal story. If David could thank one person in the world, he said it would have to be Walt Disney for his visionary efforts to create Disneyland and all of the Parks that followed. Also, without Walt Disney, there would be no E-Ticket to Broadway!

David’s all-time favorite theatrical experience was when he directed Little Shop of Horrors for his senior thesis. That was the moment when he suddenly realized what his future role in theater would be. He also loved directing The Apple Boys at HERE Arts Center and working with the entire company of If/Then. As an audience member, his favorite experience was witnessing David Cromer’s On the Town which he described as “haunting.”

The most important things in David’s life are justice, humor, connection, and, of course, chocolate chip cookies! Something that always inspires David is when a group of strangers come together to be moved by a single moment. Whether that moment is a key change in a show tune or an incredibly well-timed fireworks blast set to music, there’s no denying the power in storytelling that affects us emotionally. This is why he loves the Disney Parks, as well as going to see live theatre.

When he’s not podcasting, David enjoys connecting with friends, facetiming his family (specifically his little nephews), doing lots of home projects, teaching, hanging out with his cat, Henry, and buying too much Disney merch. He also has the pleasure of directing plays and musicals!

In addition to his love of Disneyland and theatre, David’s passion is making the world a more accepting, just, and equitable place. He continues to find any chance he can to grow “Gilana’s Fund,” a fund created in memory of his sister Gilana, which gives grants to organizations across the country that work to make a difference. He uses the E-Ticket to Broadway Live Shows and Patreon as a way to raise money for this meaningful fund.