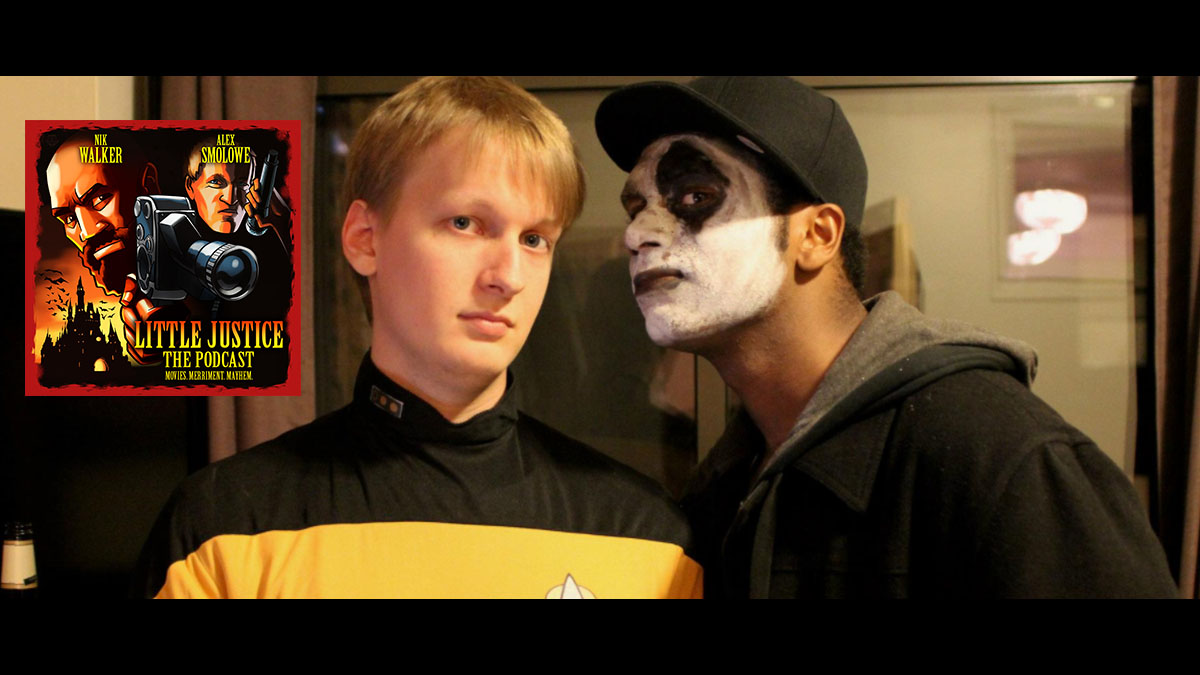 Nik Walker and Alex Smolowe, co-hosts of the podcast Little Justice, are long time friends who love to talk about Movies. Little Justice is a movie podcast like no other, where this Broadway vet and LA industry hustler dissect the secret sauce behind their favorite flicks, all while verbally abusing each other into oblivion.

Before the pandemic, Nik was leading the Broadway cast of Ain’t Too Proud, (after a three year stint playing Aaron Burr in the Broadway and touring companies of Hamilton), while pacifying his best friend Alex, a LA-based writer, editor and filmmaker, who has spent the last decade trying to trick him into appearing on a podcast.

Self-quarantine brought these cross-country friends together at long last in the virtual space that is the Broadway Podcast Network.  It’s obvious that these two enjoy each other’s company and creating this podcast together was a natural collaboration. Getting to banter movies every week with each other and their incredible, talented, knowledgeable slew of guests has been a pure joy.

When not podcasting, these two are keeping super busy professionally. Alex runs a small creative agency called Eightysix/87 with his brother, producing branded documentary content, in addition to, writing a novel and several screenplays, being a musician (a self-proclaimed piano virtuoso who is “actually a lot more musically literate than Nik look at me, I can sing but that’s it” Walker”), a real estate investor, and teaching himself game design and programming. Nik comparably does very little, he is writing scripts for feature films and plays (including a musical), attempting to learn to cook, and running his talk show, The Chaos Twins, with Sasha Hutchings, on BroadwayWorld.com.

They are finding additional inspiration outside of their creative endeavors. Alex remarks that the youth of America are his inspiration. “While it’s easy to get cynical about everything that’s happening, the young people in this country – and all over the world, really – are doing something unprecedented with their collective voices. It’s incredible to see them accomplishing this complex social progression with such confidence and energy. It fills me with more hope for the future than fear.”

Nik finds inspiration for his work from good writers who have paved the path before him, with all the fights for justice and equity, especially in moments like the pandemic, “what brings us together are words, stories, and the unique and engaging ways in which we craft them”. His top influencers include Suzan Lori-Parks, David Mamet, David Simon, James Baldwin, and Quentin Tarantino. “Each has such a unique view of the world which bleeds into their writing, and they all craft such incredible journeys for their characters.”

When it comes to theater, Alex refers to Nik as the “theater guy” Nik has had significant life changing moments as both a performer and audience member. As an actor, playing Burr was “the most fulfilling and challenging time in my career thus far.” Hamilton is a masterwork, “but I was wholly unprepared for the amount of energy, discipline and love that the character demands, onstage and off.”

As an audience member, the aforementioned influence on Nik’s writing, Lori-Parks’ Topdog/Underdog is his diary onstage. “It is gritty, it is darkly funny, it is wicked uncomfortable, it is literally everything I aspire to do as a storyteller, and she pulled it off with such poetry and history. I had no idea that this kind of tale was even possible to tell in the theater… it quite literally defined my tastes and standards for years to come.”

Both men are appreciating family at this difficult time for our country–specifically their wives who both got a shout out.  Both are equally grateful to their moms, Alex said “my Mom and Dad gave me my heart, and then admired me every day for using it. It’s an unspeakable blessing to have parents like that.” Nik appreciated his mom for “everything she sacrificed for me to get where I am.”

Listen to this week’s episode of  Little Justice with guest Tony Award-winner and Broadway stalwart James Monroe Iglehart (Aladdin) who joins the guys for the podcast’s 10th episode, The “Most Faithful Comicbook Adaptation” Movie.

Iglehart’s appearance on Little Justice show comes as a continuation of the playful on and off again rivalry between the him and Walker; this past summer the pair entertained the Broadway community and beyond with their prank wars on social media, with James pushing his #attacknikwalker campaign, and Nik coming back with #nomorejobsforjames, centered on the fact that between Hamilton, Hercules and Freestyle Love Supreme, James was working three major theater pieces simultaneously, at the time.

Listen to see if Nik can take the heat from both James and Alex.